5 Ingredients Away From FANTASTIC! This chicken dish perfect for busy schedules. 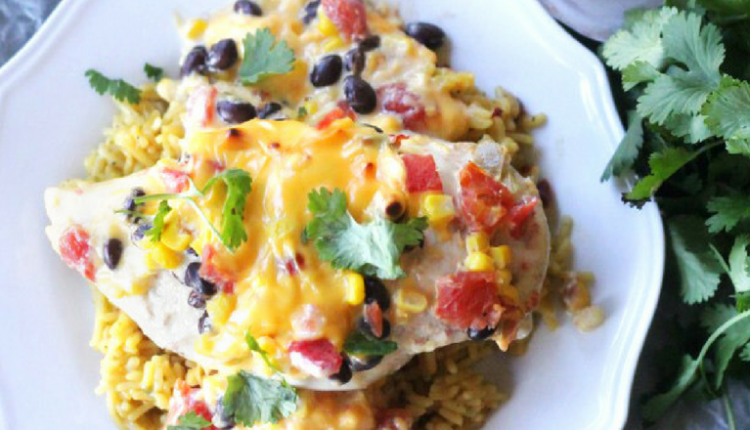 I probably sound like a broken record. If you are too young to know what that is, they are like CDs only really big and if you leave them in direct sun that can get a little melted.

Sorry, I guess that it a bit off topic – SQUIRREL!

But the point I am making is cooking more than you need in order to use it later. For example, this is a great recipe to double, then cut up the chicken and make chicken enchiladas for later in the week or for a few weeks down the road. If you are limited on freezer space, go ahead and cube up chicken and put into quart sized zip lock bag to use later.

Everything you can do ahead will save you time, energy and even financially later so try to think ahead. Cook Once, east twice isn’t just a nice sentiment, it is a lifestyle.

This is what Kimber from The Pinning Mama has to say about her creative dish.

I will admit that I eat nachos far more than I probably should.  I do try to pack them full of healthy extras to justify it, like corn, black beans, avocado, fresh cilantro, and tomatoes.  Doesn’t that sounds delicious?  So why stop there?  I mean the nachos are good because of all the stuff topping them, so why not take all that good stuff and bake it with some tender, juicy chicken breast? BINGO!  The Queso Chicken Bake was born!

Quick Tip: Go ahead and cut into strips for smaller portion size, dice it up an you have the fixing for an awesome south of the border quesadilla.

Photo and recipe courtesy of  Kimber at The Pinning Mama
Pages: 1 2

This is the Kind of Easy Recipe I Would Have Served Julia Childs!

This Starbucks Blueberry Muffin Copycat recipe is the BOSS!